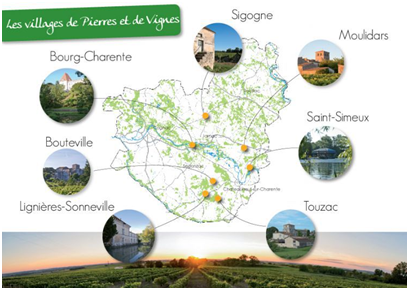 BOURG-CHARENTE, village of the XVIIth century, classified "village of Stones and Vines" This network proposes to you to discover 9 communes gathered around a common heritage, drawn over time by the culture of the Grande Champagne vineyard. These small atypical villages will seduce you for their authenticity ... Between Jarnac and Cognac, the village of Bourg-Charente is in the area GRANDE CHAMPAGNE, vineyard 1er cru of COGNAC. The commune of Bourg-Charente has the distinction of having three wines present on its territory. The southern half from the river is in Grande Champagne, the northern half in Petite Champagne and a plot, now uncultivated, in Fins Bois. This viticulture has a lot of influence on the heritage with the presence of typical viticultural farms with closed courtyard of high walls and a porch. Similarly, there are cellars on the banks of the Charente, formerly used to transport barrels by the gabares. Note that the house Marnier Lapostolle which produces the Grand Marnier is located on the commune at the castle of Bourg-Charente. This company is in full expansion and has just built a new distillery for the production of bitter orange liqueur, ingredient of its famous liqueur. RESTAURANT in BOURG-CHARENTE: Restaurant «La Ribaudière»: This gourmet restaurant is the only Michelin star in the department. It has a terrace on the edge of Charente and private lounges; Cooking classes are offered (up to 8 people). Catering "la Maison du Passeur: Lunch and dinner 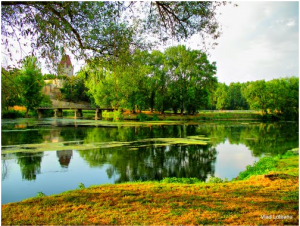